When I picture Diana, Prince of Wales, it is this gown which she’s wearing. Just one of the many iconic gowns worn by the late Princess, for some reason, this one always sticks in my memory. Known as “The Elvis Dress” (a nickname given to the ensemble by the princess herself because of the similarity of the high white collar of the jacket to those on the jumpsuits worn by Mr. Presley at his most rotund), this dress and matching bolero speak volumes of the stream-lined style favored by the Princess of Wales in the late 1980s.

Well aware of her status as a fashion icon and style-setter, the Princess of Wales was always careful to don only the most flattering and fashionable garments when out for an elegant and formal evening. By the late 1980s, Princess Diana had pushed aside the fuller-cuts, crinolines and flowing chiffons of her earlier days in favor of bolder textures and sleek, tailored gowns. I think this gown is the epitome of that trend. 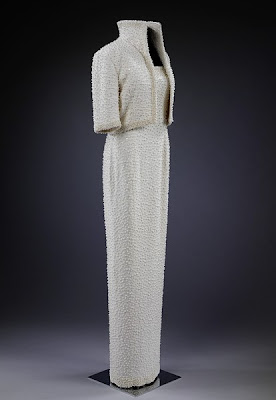 The strapless gown of white silk is encrusted with pearls and sequins. It’s given a sense of drama by the tall collar of the matching bolero. It’s the work of Catherine Walker, a favorite
couturière of the Princess of Wales. Diana’s association with Walker began during her pregnancy with Prince William of Wales in 1981. Walker continued to design for the Princess until Diana’s death in 1997.

The princess wore the ensemble to the British Fashion Awards in October 1989, on an official visit to Hong Kong, and, later for an official portrait. The gown had actually been commissioned for the official visit to Hong Kong. Walker envisioned a sheath of pearls for the occasion. Tens of thousands of pearls—long a symbol of the “orient”--were embroidered onto the dress and jacket.

Walker would recall in 2012: “Whenever I saw the Princess in this dress, I could not help but feel that it would not be possible for anyone else ever to wear this dress and bolero. She shone in the dress and the dress shone around her in a shimmering column of glistening pearls.”

It was one of the 79 dresses which the Princess of Wales sold in a charity auction in 1997. The auction, held by Christie’s, raised over three million pounds for AIDS and cancer research. A commemorative doll of the princess shows her in this dress. 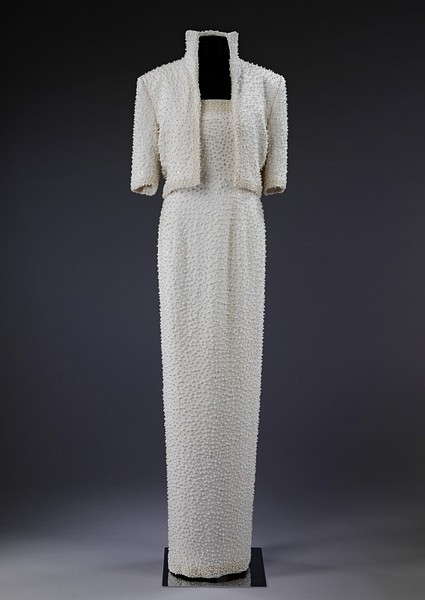 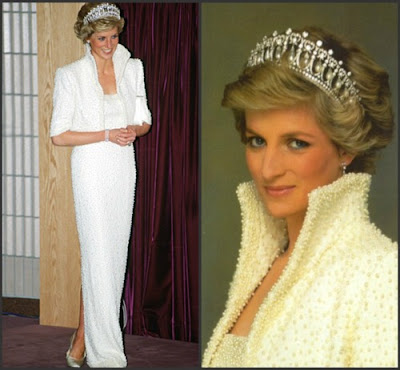 Posted by Joseph Crisalli at 12:02 PM