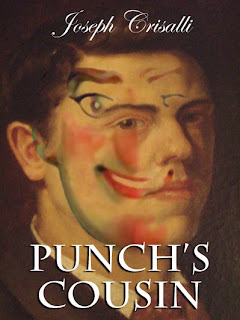 Julian felt the odd sensation of rocking. The feeling was unsettling. He was, at once, a child being rocked in arms that smelled of rosewater and salty perspiration. “Didn’t I tell you, Master Julian? Didn’t I tell you? You’re a naughty, naughty boy. I told you they’d eat you alive. Didn’t I? Didn’t I? Now, what will Her Grace say? She must never know. Never, never, never…”

“Your Lordship?” Mr. Halifax flew from the chair beside Julian’s bed and knelt beside him.

“What? Who are you? Don’t touch me!” Julian screamed.

“It is I, Lord Julian. Robert Halifax.”

Julian leaned back against the pillows. He realized he was in his cabin on the Hyperion.

Robert reached for Julian’s hand. Julian pulled his own hand back quickly.

“Begging your pardon, Sir.” Robert Halifax said, rising and taking his seat again. “You seem to have had a bad dream.”

“It would seem so.” Julian rubbed his eyes. “I so infrequently sleep. Perhaps that’s why. Too many dreams.”

“You need to sleep, Julian.” Robert Halifax smiled. “Do you mind if I just call you by your given name?”

“I don’t suppose so.” Julian sighed. “Considering you’re sitting in my bed chamber and have been watching me sleep. I imagine that gives us some degree of familiarity.” Julian twisted the ring on his left index finger. As he did, he noticed the brilliant blue sparkle of the diamond on his right hand, and thought, for a moment, of his father and of Punch. “For just how long have I been sleeping, Mr. Halifax.”

“Robert,” The man smiled, “please. For about two hours. I hope you don’t mind that I stayed. I was concerned about you. After I brought you back here, you were somewhat disoriented and your breathing was labored.”

“And, so, you thought you’d watch me?” Julian asked.

“I am a physician.” Robert responded. “I thought I might be of help.”

“You didn’t introduce yourself to me as such.” Julian narrowed his eyes.

“I suppose you would be a physician. You did help bring my sister’s…”

“Child, yes.” Robert nodded. “However, let’s not talk about any of that presently. You need to rest. Do you remember what happened on deck?”

“I remember having breakfast with you.” Julian answered irritably.

“We didn’t have breakfast, Julian.” Robert shook his head.

“Certainly we did. We were in the dining room—all those frescoes and…” Julian paused.

“You must be hungry.” Robert interrupted.

“A body needs nourishment and sleep—two things you seem to be lacking. Please, let me call for a porter to bring us something.”

“I don’t want anything.” Julian answered.

“Well, I do.” Robert stood, walking to the door. As he did, Arthur entered the cabin.

Robert Halifax scowled at the man.

“Pardon me, Your Lordship, Mr. Halifax.” Arthur grinned with bilious treacle. “Only, I’ve come to collect your letters, Sir. We’ll be docking soon and I thought you would want to post something to Her Grace.”

“My man,” Robert said, “His Lordship needs his rest and some sustenance. Fetch us a tray, please. Something light.”

“As you wish.” Arthur growled, exiting the room.

“An odd fellow.” Robert commented, returning to his seat. “Not bad looking though.”

“He’s quite disagreeable. My mother is very fond of him—as fond as she could be of a servant.” Julian muttered.

“How do you know my sister?” Julian asked.

“Please, let’s not speak of all of that. Just rest.” Robert responded.

“Very well, Robert. I’m not on this voyage for my health. I’m in search of Barbara. She’s gotten herself into…trouble. I need to know all that I can in order to return her home.”

“To the Baron?” Robert raised an eyebrow. “Do you think he’ll have her when he finds out she’s born a child out of wedlock?”

“Well, I can return her to Mother.”

“Her Grace must never know…”

Julian felt the blood in his arms alight into stabbing flames which burned through the sinew and muscle of his body to fill his head with a familiar black smoke.

Nanny’s voice, Punch’s voice…his mother’s. “You are quite mad, aren’t you? You little hobgoblin!” The voices of the people on the deck, singing in drunken delight of cruelty.

Julian rolled onto his side and pressed his body against the coolness of the cabin’s wall.


He turned his face unto the wall
As deadly pangs he fell in.
"Adieu! Adieu! Adieu to you all!
Adieu to Barbara Allen!"

Robert rose and sat next to Julian on the narrow bed. He put his hand on Julian’s shaking shoulder.

Julian spoke—his throat ached as the words poured out, words that were not of his own creation, yet still came from his mouth.

He rolled onto his back and looked up at Robert.

“Tell me, man, about this ‘Elegant Ogress.’ She knows what is in my head. What was…”

A laugh spilled from Julian’s face.

“They don’t think I can feel, but I can. I felt them rip my head open. You can help me. They won’t eat both of us.”

Bravo! Bring on the voodoo :)

What a terribly vulnerable position to be in! Keeping fingers crossed that Robert is a straight-shooter.

Dashwood, let's hope Robert is what he seems to be. However, I'd think Julian should try to keep his wits about him.