Object of the Day: A Victorian Papier Mache Fire Screen 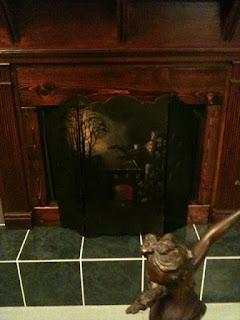 During the reign of Queen Victoria (and for a long while afterward), the English couldn’t stand a void. Something as black and empty as an unlit grate was not to be tolerated, and, so, the art of the fire screen was taken to new heights during this period.


With a carefully scalloped top edge, this tri-fold fire screen is constructed of the Victorian-favorite papier mache. Inlaid with mother-of-pearl, the screen has been painted with a scene of a castle. Cleverly rendered against the ebonized papier mache, the castle appears to be lit from behind with a shadowy figure lurking in the wide entrance. 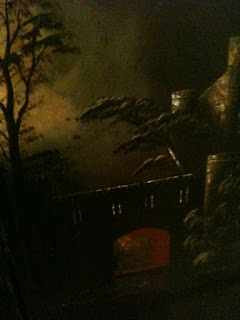 Obviously, screens such as this one had to be moved when the hearth was in use. Fire and papier mache aren’t a good mix. The screen would be placed off to one side or displayed atop a cabinet or sideboard when the fire was lit. Such screens didn’t survive very often from the sheer amount of handling they received and the fact that, very often, they were accidentally placed in front of a still-warm hearth. However, those that do remain, are brilliant reminders to us. They encourage us to take some time to fill the voids in our lives with something clever and beautiful.
Posted by Joseph Crisalli at 9:57 AM