We’ve looked at quite a few of these jewel-framed miniature portraits of eyes. Eye miniatures were a curious but brief anomaly in miniature painting that enjoyed a short turn in fashion at the end of the 18th century.


These sentimental paintings were given as tokens of affection from a woman to a man, typically, in an attempt to capture “the window of the soul” and offer an into the subject’s most intimate thoughts and feelings.

This one was made in the early Nineteenth Century. As usual, the painting is watercolor on ivory. We’re not sure who created it, who the subject is or to whom it was given. The shape of the piece is unusual, elevating the subject into a new elegance. The pearls set into the gold frame indicate that this was meant as an important gift. 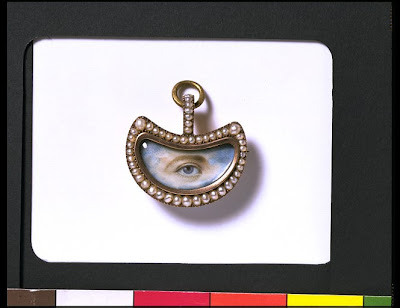 Posted by Joseph Crisalli at 11:01 AM No comments:

Made in England in 1870, this attractive fan features a paper leaf with mother-of-pearl sticks and guards and a chased gold loop. This fan, from the Royal Collection, was once owned by Queen Alexandra (“Bertie, I can’t hear you”), Consort of fuzzy man-about-town King Edward VII.

The new school at Reading was designed by Alfred Waterhouse (1830-1905). The structure replaced one that had been founded by Henry VII. Along with the presentation of the fan to the Princess to commemorate the occasion was to be an address by the Reading Mayor. However, much to the Princess’ relief—since she probably couldn’t have heard a word of it anyway—the address was not read aloud, but rather presented in a novel way.

The speech had been reduced by photography (a technology which very much fascinated Alexandra, a known shutterbug), and was mounted in a delicately carved mother-of-pearl and gold frame. This was tied by a ribbon terminating in a gold and blue enamel “A,” to the gold fan loop along with a solid gold vinaigrette adorned on one side with the coronet and monogram of the Princess, and, on the other an inscription commemorating the date.

The fan leaf, inscribed MARCUS WARD DELT. and HOWELL JAMES & CO. is painted, in the center with two intertwined letters—“A”—surmounted by the Prince of Wales’s coronet. Flanking this are views of Reading School and Reading Abbey, with the arms of Reading and of the Princess of Wales. All of this, as well as a miniature version of the fan—was presented in a fitted box. Sadly, only the large fan remains—the vinaigrette, frame, ribbon and miniature fan having since been divorced from the original set and, consequently, lost. I would guess they’re somewhere in Sandringham in a drawer along with a bunch of other things which Alexandra—when Queen—squirreled away.

Posted by Joseph Crisalli at 11:01 AM No comments:


Wax has been a favorite medium for centuries due to its ease of use and versatility. Portraits in wax portraits became quite fashionable in the Eighteenth Century in Britain. As opposed to the life-sized wax figures seen at waxworks such as Madame Tussaud’s, miniature figures and busts were often created as keepsakes. The tradition continued well into the Nineteenth Century, especially before the advent of photography.


These miniature figures were modeled from the life. The waxes were not only quite portable, but due to the nature of the medium, they had an attractive, naturalistic look which was warmer than figures in stone or metal. Often, these waxes were tinted and embellished with textiles, seed pearls or colored glass eyes, to augment the life-like appearance of the portrayal. Best of all, for a more permanent figure, a mould could be made from this initial model, from which further copies could be cast in bronze or spelter.

Here, we see a wax bust depicting Queen Victoria who is shown turned to the right wearing a V-necked dress with sleeves decorated with ribbons and a sash. This figure was created in 1837 upon Victoria’s accession by sculptor William Le Grand. Not much is known of Le Grand and it’s unclear if he not only sculpted by published copies of such waxes.

Posted by Joseph Crisalli at 10:58 AM No comments:

Painting of the Day: A Miniature of King Edward VII and Queen Alexandra, 1902


Created in watercolor on ivory in 1902 to commemorate for the Coronation of King Edward VII and Queen Alexandra, this miniature by Johannes Zehngraf (1857-1908) is set in a pendant brooch with an intricate pearl and diamond Maltese cross border. The miniature was set this way so that it could be used as Queen Alexandra’s Family Order. It hangs from a red and white ribbon.

The miniature was first recorded in the Royal Collection during the brief reign of King Edward VIII who had a lot in common with his grandfather (Edward VII) as far as outlook and lifestyle were concerned (not as far as having a desire to serve his country is concerned). You can actually see the resmblence of the one-time Edward VIII to his grandmother, Prince Alexandra as she is depicted in profile on this miniature.
Posted by Joseph Crisalli at 10:57 AM No comments:


Mikhail Evlampievich Perkhin (1860-1903, frequently listed under the anglicized version of his name, Michael Perchin) was one of Fabergé’s chief workmasters, and, undoubtedly, alongside Viktor Aarne, one of the most brilliant and prolific artists under the employ of Carl Fabergé.

Here’s a nifty example of his work—a lovely miniature piano of nephrite, two-color gold and enamel. We’re not sure the exact year that Perchin made this, but it appears to match his pre-1896 work.

The piece didn’t join the other Fabergé in the Royal Collection until it was somehow acquired by Queen Mary, Consort of George V (1867-1953), sometime between 1922-1931
Queen Mary, like her mother-in-law, Queen Alexandra, before her, had a special fondness for Fabergé’s miniature “objets de fantasie.” These include several examples of miniature furniture in the form of bonbonnières (candy dishes).

This miniature piano of Siberian nephrite is carved and polished to resemble ebonized wood. It is a nearly exact replica of the real thing. The lid opens for use as a bonbonnière and the front drops down to reveal a miniature keyboard in gold and enamel, inscribed C. Fabergé.

The piano belonged originally to Tsarina Alexandra Feodorovna—niece of Queen Alexandra and King Edward VII. The piece can be clearly seen in one of the display cases in photographs of the exhibition which Fabergé held in St Petersburg in 1902. We’ll never know how Queen Mary managed to get it, but I’m not surprised that she did. The former Mary of Teck was passionate about retrieving items which once belonged to the British Royal Family or other related Royal Families so that they might be preserved.

Regular readers of this blog know how much of a fan I am of Her Majesty Queen Mary. If you, too, are a fan of Mary of Teck, you might enjoy our “Teck Support” products—available only in our online store. 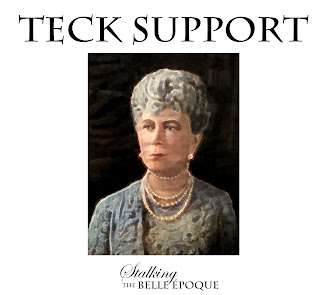 Posted by Joseph Crisalli at 10:56 AM No comments:

Masterpiece of the Week: A Garnet Ring with an Onyx Cameo of George IV

Made circa 1820, this handsome gold ring sports a miniature white on black onyx cameo which has been bezel-set into a faceted, foil-backed garnet.

While it was made during the Regency Period, the ring didn't come to the Royal Collection until it was acquired by Queen Mary in 1933.

Throughout the Regency and the 1820s, Rundell, Bridge & Rundell, then the Royal Goldsmiths, supplied George IV with a variety of rings set with cameos and intaglios cut with his likeness. Georgie would give these rings as tokens of affection to his favorites.

This ring, however, appears to be the only one of its kind, set with a miniature cameo into a garnet.  This cameo, in fact, is the smallest in The Royal Collection.

Posted by Joseph Crisalli at 10:55 AM No comments:

Object of the Day, Museum Edition: A Theatrical Miniature, 1837

Prince Albert and Queen Victoria both enjoyed the theater. Victoria particularly favored “foreign” productions—a trait for which she was often criticized by those who thought she should be more visibly supportive of English theater.


Among the many objects they collected, Victoria and Albert often obtained images which reminded them of their love of the theatrical. Prince Albert acquired this miniature painting in 1843. Painted in 1837, the painting depicts a crucial scene from Goethe’s Torquato Tasso—a drama about the life of one of Italy’s most important Renaissance poets.

Posted by Joseph Crisalli at 10:54 AM No comments: