History's Runway: A Costume from "A Midsummer Night's Dream," 1914

Naturally, some of the most unusual and interesting historical clothing that still remains are pieces which were designed for theatrical use. Here we see a theatre costume of a dress of white crêpe-de-chine. The skirt is stenciled with sprays of pink flowers and weighted with a fringe of tiny silver balls. Cap sleeves, a deep V-neck with a silver lamé infill at the base and gold ball buttons create an ethereal look. The tunic is gathered at the bust with a thin gold cord belt ending in golf briolettes and red beads. A deep macramé fringe, decorated at the top with small red beads completes the outfit. 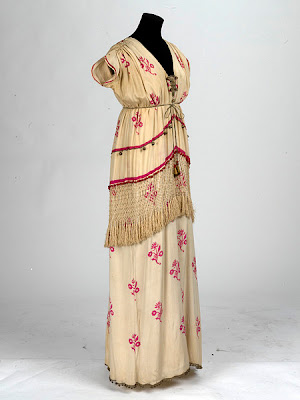 This costume was commissioned by Harley Granville Barker (1877-1946) who was an established director and promoter of contemporary drama, directing three of Shakespeare's plays at the Savoy Theatre--The Winter's Tale, Twelfth Night (both 1912) and A Midsummer Night's Dream (1914). Barker did away with historical costume, inviting his designer, Norman Wilkinson (1882-1934), to create simple stylized period dress without attempting to imitate it.

This gown comes from Barker's production of A Midsummer Night's Dream. The play's mortal characters wore costumes loosely based on Grecian dress while the fairies and ethereal characters wore sparkling costumes to match their gilded faces. Barker's then wife, Lillah McCarthy, played Helena, and for her first scene, she appeared in this dress of white crêpe-de-chine with mauve shoes and red beads. Helena's long blonde wig was adorned with a wreath of flowers. 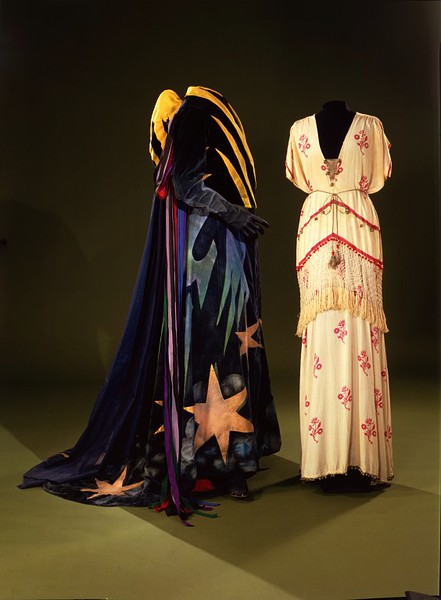 Posted by Joseph Crisalli at 1:52 PM