From the outside, this looks just like a normal Victorian Mansion—beautifully painted and meticulously maintained. However, once inside, visitors immediately realize that the house is a peculiar labyrinth—a maze of corridors that end abruptly, staircases that hit the ceiling with no access to the next floor, doors that open into tiled walls, and worse still, doors the open onto thirty-foot drops. Architecturally bizarre, the scale of the structure is off. For example, one staircase—called the Switchback Staircase—climbs seven flights and features forty-four steps. You’d think that would lead to a great height. But, no. The staircase only rises nine feet. You see, the risers are only two inches tall. 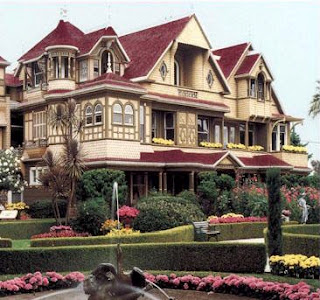 The house was built ceaselessly for thirty-eight years from 1884 until Mrs. Winchester’s death in 1922. She insisted that work never stop. At one point, the Winchester House reached seven stories in height, however, in 1906, an earthquake destroyed that portion of the mansion. Today, it stands at a proud four stories. Why did Sarah Winchester insist that the house always be in a state of construction? Many people have some theories about that. 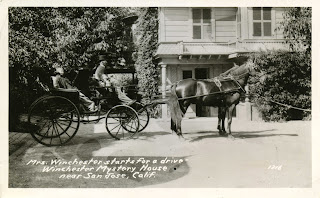 Sarah Winchester was the widow of William Winchester—inventor of the Winchester Rifle. Upon his premature death (shortly following the death of their young daughter), Mrs. Winchester inherited millions of dollars. She also inherited an extreme sense of guilt and depression. Legend has it that a medium known as “The Boston Medium” advised Mrs. Winchester to move to California and begin building a home. As long as the house was being built, she would never die. Some believe that the medium told Sarah Winchester that she was haunted by the spirits of all of the people who had been killed by Winchester Rifles. Here, the story differs from telling to telling. Some say that Mrs. Winchester was told that she herself was haunted by the spirits who would kill her if she stopped building the house. Others believe that Sarah was told that the spirits took the lives of her daughter and husband as punishment. Regardless, Mrs. Winchester seems to have believed that she was being tormented by ghosts and assuredly took the psychic’s advice to heart. Construction on the house only stopped after she died. 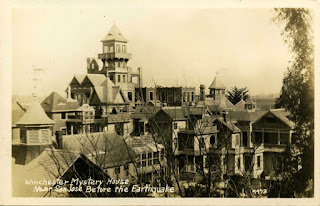 Many believe that the house’s lack of a blueprint and odd floor plan owe to Mrs. Winchester’s desire to confuse the spirits which she thought haunted her. She had—in the middle of the house—a hidden seance room which could only be accessed through a push-button operated door. To exit, she would slip out of a window, onto a landing, down a flight of stairs, and, yet, somehow end up in the place where she started.

Mrs. Winchester was also obsessed with the number thirteen. The drains all have thirteen holes, the stained glass windows feature thirteen colored stones, coat hooks line up—thirteen in a row. She even went as far as to have an opulent antique chandelier altered so that it would have thirteen arms instead of twelve. In Mrs. Winchester’s honor, a large topiary sculpture of the number thirteen stands outside the mansion, and, on every Friday the Thirteenth, the bell in the clock tower is chimed thirteen times at 1:00 PM (13:00 hours). 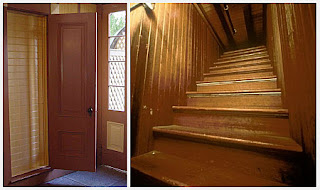 Sarah Winchester spent $5.5 million on the construction of her ghost-baffling mansion. That equates to about $71 million dollars in today’s economy. Still, at the time of her death, the house was considered so strange that it only sold for $135,000. Five months after Sarah’s death, the Winchester House was open to the public. Christened, “The Mystery House” by Harry Houdini in 1923, the house is still open to the public who are welcome to tour its winding halls and attend special events on holidays. For more information, visit their Web site.

Posted by Joseph Crisalli at 4:29 PM