Now let me see... what is it you call your job? Oh, yes. Public relations. Sounds like something pretty dirty to me.
--Charlotte Hollis 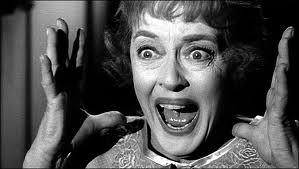 Davis would play Charlotte Hollis—an eccentric Southern recluse who hides in her family’s crumbling Louisiana mansion after being accused of murdering her lover many years earlier. Crawford would play Miriam Deering, Charlotte’s strong-willed cousin who’s come to help Charlotte vacate her home when it is ordered to be torn down.

Joseph Cotten was cast as Dr. Drew Bayliss—a long-time friend of the family. The cast was further completed with Cecil Kellaway as an insurance investigator, Anges Moorehead as Charlotte’s cranky but loyal maid, a young Bruce Dern as Charlotte’s girl-hood lover, Victor Buono as Charlotte’s father, and Mary Astor as Charlotte’s former rival. Davis had specifically asked for Astor to play the role of Jewel Mayhew. Astor was one of the few female stars that Bette Davis actually liked. They had been friends and had worked well together on The Great Lie. When Bette Davis liked you, she really liked you. When she didn’t, she really didn’t.

Shooting began with both Davis and Crawford on location at Houmas House in Darrow Louisiana which would serve as the exteriors for Charlotte’s family home. However, soon, Miss Crawford developed one of her famous “Joan Crawford Colds” and was consistently absent—only appearing for four days of filming. Rumor had it that she couldn’t face working with Bette Davis again. While relations between them had been frosty on “Baby Jane,” they did manage to maintain a somewhat professional attitude. This time, however, Crawford wasn’t cooperating and she withdrew from the picture.

Aldrich scrambled to find a suitable star for the second leading part in the film. At one point Vivien Leigh was approached to replace Crawford. Leigh responded, “"No, thank you. I can just about stand looking at Joan Crawford's face at six o'clock in the morning, but not Bette Davis'." Katherine Hepburn didn’t return Aldrich’s calls. Barbara Stanwyck and Loretta Young were also considered for the part of Miriam, but either declined or were deemed unsuitable for the role. The only other actress of that caliber that Bette Davis wanted was her old friend and co-star Olivia de Havilland.

Aldrich flew to Switzerland and, after much cajoling, convinced de Havilland to accept the part. Later, de Havilland would confess that she really did it as a favor to Bette Davis. She said, “I always thought it would be fun if [Bette and I] could work together. Then, I was offered the chance to work with her on the film that became Hush...Hush, Sweet Charlotte when Joan Crawford withdrew. I knew Bette wanted badly to work, and Jane had been such a success that Bette was quite anxious. They had to find the replacement, and Bette wanted me. The problem was I wasn't as anxious to work as she was. I didn't need to. I wasn't thrilled with the script, and I definitely didn't like my part. I was reverse-typecast, being asked to be an unsympathetic villain. It wasn't what people expected of me. It wasn't really what I wanted to do. Bette wanted it so much, so I did it. I can't say I regretted it, because working with her was special, but I can't say it was a picture I am proud to put on my résumé. Given the choice, I wouldn't have deprived Joan Crawford of the honor."

On the first day of shooting together, Bette Davis and Olivia de Havilland toasted one another with bottles of Coca Cola—a sly slap-in-the-face to Joan Crawford’s memory. Crawford’s husband, Al Steele was an executive at Pepsi Cola.

The result of their collaboration was an excellent Southern Gothic thriller with plenty of chilling moments despite the obviously fake severed body parts. The three leads deliver excellent performances which are relatively restrained given the material. And, it’s interesting to see Olivia de Havilland in a “bad girl” part. With Halloween around the corner, Hush…Hush, Sweet Charlotte should certainly be on your play-list.


Posted by Joseph Crisalli at 6:00 PM