This delightful painting by Samuel Percy depicts a lady with three children playing under an apple tree. This is both a genre painting and a landscape in the style which was fashionable in the late Eighteenth and early Nineteenth Centuries. In a unusually animated and playful composition, a boy is perched in the tree, as another kneels below with a hatful of apples. Meanwhile, the little girl sobs for an apple.

This work was recorded in a wax museum in Fleet Street, London in 1791, where it formed one of the collection of wax figures. Percy's original, seen here, is housed in the V&A. 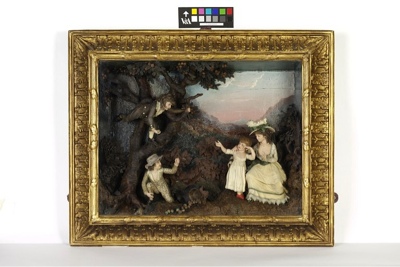 Posted by Joseph Crisalli at 10:46 AM

Email ThisBlogThis!Share to TwitterShare to FacebookShare to Pinterest
Labels: Painting of the Day