Mastery of Design: The Frederick the Great Snuffbox, 1775


Frederick the Great amassed an amazing collection of uniquen and valuable snuffboxes. This is one of the most impressive. This cartouche-shaped snuffbox is comprised of seventeen panels of bloodstone mounted in a cagework of gold and set with a profusion of diamonds, some of which are colored yellow and others foiled. 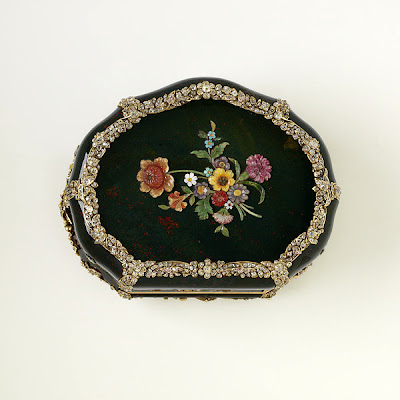 The box's cover is set with the image of a vase, colored to resemble porphyry. In the vase is set a bouquet of stylized flowers comprised of emeralds, rubies and diamonds. This is bordered by diamonds set in gold and sprigs of flowers.

The walls of the box are divided into six sections set with sprays of flowers. The base is encrusted in a similar fashion with a smaller bouquet of cut flowers.

Frederick the Great of Prussia was a great admirer of the arts. Of his many gold boxes, some of them he designed himself. He carried a box at all times; in fact, one is even said to have saved his life by deflecting a bullet during the battle of Kunersdorf in 1759.

This box by an unknown artist is based on a design by Jean Guillaume George Krüger--a London-born artist who was summoned to Berlin in 1753. 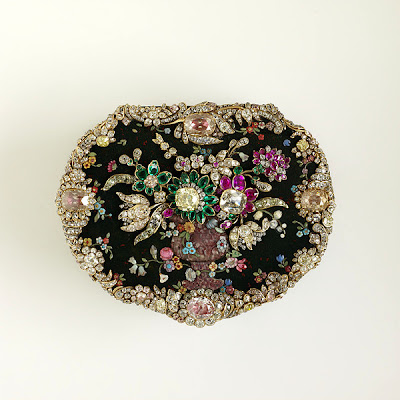 Posted by Joseph Crisalli at 10:30 AM