This French painting was acquired by King George IV in 1817. It was a peculiar purchase for the King who wasn’t prone to picking domestic genre scenes. He was, however, enchanted by all things French, and perhaps this intimate painting with its frank depiction of raising children, put him in mind of French attitudes toward life.


This handsome piece comes from the hand of Jean-Baptist Greuz who achieved considerable fame with his paintings of Eighteenth-Century, French domestic life. This work from 1759 who created, along with a companion piece for one of Greuz’s most loyal patrons who allowed the works to be displayed that year at the Paris Salon.

The following was displayed on a card alongside the painting:

A Painting representing Rest, characterized by a Woman who obliges her son to be silent by pointing to her other sleeping children.

The rather disheveled little boy has been up to considerable mischief. We can see that he’s been irritating his mother by making noise on his toy trumpet. We can assume that he’s responsible for the broken drum which hangs from the back of the chair of the slumbering child. His mother urges him, “Silence,” by pointing at the other little boy who is fast asleep.

The companion painting to this work showed the same mother with the disheveled boy. That painting, entitled “The Spoilt Child,” depicted a scene of paternal indulgence as the mother watches her son feed his dinner to a happy dog. 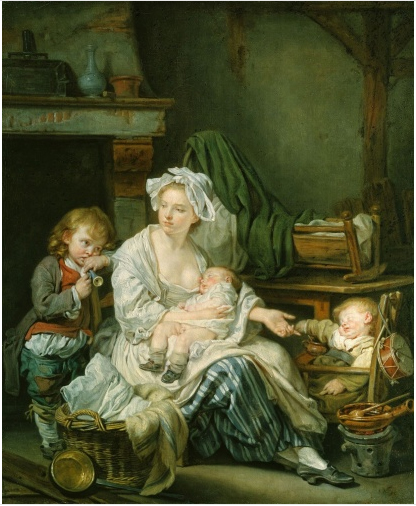 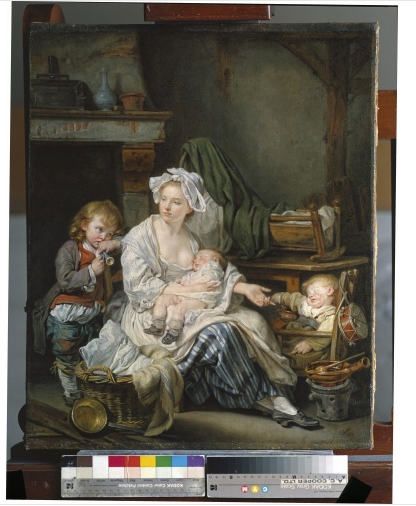 Posted by Joseph Crisalli at 11:40 AM