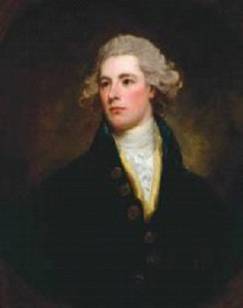 In 1783, William Pitt, at the age of 24, became the youngest Prime Minister of Britain. He kept the post until 1801 when he retired, but, came back again as Prince Minister in 1804 and stuck around until he died two years later.

Pitt, though considered a great, if not controversial, Politian by many, was thought of as a tad peculiar in his personal life. He was charming, but also shy and awkward. He made his lack of interest in social ambitions quite clear and vocally objected to any form of intimacy. After backing out of a high profile engagement, telling the girl’s father that, “I am compelled to say that I find the obstacles to it decisive and insurmountable, he preferred the company of handsome young men, but even grew weary of them after awhile and would make his desire to be alone was more important to him. His greatest love, it seems, was port wine and he was proud to call himself “a three bottle man.”

And, yet, because he was thought of as very attractive and because his wit made him appealing, Pitt found himself, uncomfortably, the center of attention. Many wished for his favor and strove to impress him.

This print shows some of that spirit, depicting John Bull (a personification of Britain in much the way Uncle Sam personifies the U.S.) viewing preparations for William Pitt’s (referred to as Billy here) birthday celebration. The print, published May 18, 1802, is inscribed with the title. S.W. Fores published the print which was made by Charles “Angus” Williams (1775-1839).

Posted by Joseph Crisalli at 10:10 AM