The leaves of hand fans provided yet another surface to introduce popular artistic themes to the public. Hand-painted fans were treated with as much seriousness as any oil painting, and fan painters enjoyed the opportunity to present contemporary compositions in a different format.

One of the most exuberant fan painters of the Eighteenth Century was Swiss artist Johannes Sulzer (1748-1794) who, unlike most of his contemporaries, took to signing his fans. Above, we see a good example of Sulzer’s work—painted during a time when “Conversation Pieces” were quite the fashion. He’s given us such an intimate scene, depicting a couple engaged in a conversation with a young woman knitting. The reverse of the fan shows another popular late Eighteenth Century subject—an elegant house with a formal garden.

Sulzer has included images of two bird cages—one open and the other closed--flanking the miniature painting of the grand country house. These bird cages were a favorite subject for the artist and, more often than not, appear somewhere on his fans—acting almost as a signature of their own.

Sulzer painted this fan of gouache on paper in Switzerland between 1780 and 1790. The whole is given shimmer with a silver wash. It is signed, “Peint & monté par J. Sulzer au Rossingnol à Winterthur.” 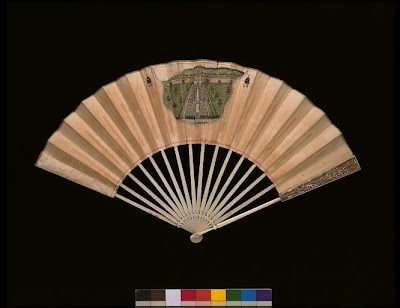 Posted by Joseph Crisalli at 9:09 AM