Object of the Day: The Grim Monkey 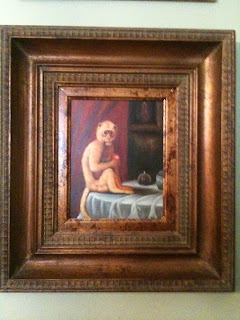 This is the very first real painting I ever purchased. It’s not an antique, and, admittedly, it’s a little peculiar, but I liked it immediately. It has the sort of weird vibe of Seventeenth Century Flemish still life paintings which often included animals (usually dead) on a draped table with fruit.


Here, we have a grim monkey who looks rather concerned about something. He’s eating a persimmon while sitting on a table in a crimson-draped nook. All these many years later, the painting still appeals to me. I like its use of color and the sense of strange drama. Besides, how could you go wrong with a monkey?

Simian subjects were a popular subject matter of Eighteenth and Nineteenth Century paintings. They were both exotic and attractive and provided the viewer with an opportunity to see a creature that they’d have little chance of seeing otherwise. 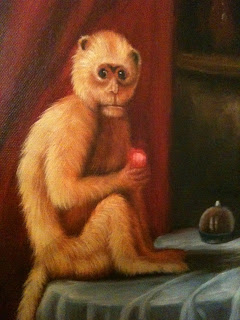 Posted by Joseph Crisalli at 10:44 AM

Email ThisBlogThis!Share to TwitterShare to FacebookShare to Pinterest
Labels: Object of the Day, Painting