Treat of the Week:  A New Year's Feast 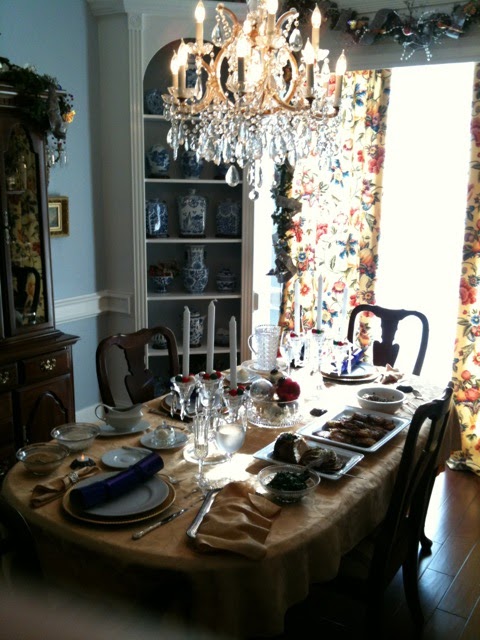 We started the New Year's Eve festivities with some delicious homemade miniature latkes which my mother made in honor of our friend, Fran.  Traditional latkes--essentially potato pancakes--are made from shredded potatoes, finely chopped onion, flour and eggs.  These were served topped with sour cream, caviar and chopped hard-boiled egg and Veuve Clicquot Champagne.

The next day, 2012 Began with the popping of peacock-purple crackers.  Once Bertie was convinced that the noise had subsided, we adjourned to the dining room to enjoy a roasted Tangerine and Cumin Pork Tenderloin prepared in a Latin style--rubbed with olive oil, cumin, salt and pepper, and drizzles with orange juice, tangerine marmalade and white vinegar.  Adorned with chopped herbs, the roast was served with a sour cream mustard sauce, a reduction of marmalade and orange juice and apple sauce.

Accompanying this perfect pork were larger versions of the potato latkes, and, the traditional black-eyed peas and greens.  The black-eyed peas were fresh peas prepared with caramelized shallots and a balsamic vinegar reduction and the greens were delicious steamed baby spinach with a little garlic; the cloves of garlic ere removed before serving. A freshly-baked cornbread added a rustic and rich touch.

The real gem in the New Year's crown was my mother's gorgeous homemade cheese cake topped with a lush chocolate ganache.  Baked atop a luscious homemade cookie crust, the cake was garnished with fresh raspberries and whipped cream rosettes.

With a start like that, it's sure to be a wonderful year.
Posted by Joseph Crisalli at 1:54 PM

Email ThisBlogThis!Share to TwitterShare to FacebookShare to Pinterest
Labels: Treat of the Week

What beautiful meals! With a start like that, I am sure that 2012 will be a fantastic year for you and your family.

Best meal to date. I have to say, just seeing the picture of the cheesecake made my mouth water. I wish I had a piece! I love love love caviar on latkes with chopped egg. Elegant. Too bad I've got to be a good boy now and eat my ugly, yucky shakes and purees of greens. I agree with Shawn, with a start like that, it's got to be a super year. All the best.....MB.

Oh Holy Yumsies! If only one little bit of any of that could pass through my screen, I would be one happy woman!

Oh, I am sooooo honored. Kosher schmosher, I would rip into that pork! The latkes are perfect, better looking than ma's but don't tell her. I would sell my children if I had any for a little piece of that cake. My god, it looks like it came straight from a NY bakery. I'm very, very impressed!!! Happy New Year!!!

So here's the thing History Boy, I look at the pictures of the food every week, then I look at your picture.  There you are smiling with your cute dog and your grinning puppet and I can't help but notice that you're not a fat hog.  How is it that you can eat dozens of cookies and cheesecakes and you remain a normal sized man?  Are you magic?  Do you and your puppet do slimming voodoo rituals?  You seem to have a good working knowledge of voodoo.  Is that it?  Is it unicorn tail tonic?

Here's the next thing.  I want that cake and some of those latkes shipped to me along with your special magic do-do bird diet elixir.  In exchange, I won't complain.  By the way, I bought a Teck Support mug.  Can't wait for it to come.

Happy New Year.  My resolution is to learn to cook like your mother.  I know no one will do it for me.

Looks delicious, all of it, but especially the cake.