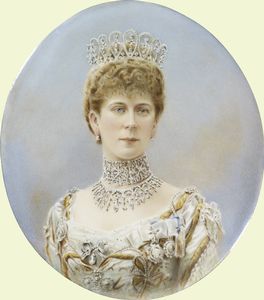 As a young Princess, Mary of Teck spent most of her pre-married life playing assistant to her strange, rotund, but wildly popular and involved mother Princess Mary Adelaide of Cambridge (the Duchess of Teck). A teenaged Princess May spent her days organizing her mother’s massive amounts of correspondence and helping out with her mother’s many, many charities. One of these charities was the London Needlework Guild which had been started in 1882 by Lady Wolverton as the London Guild. Originally, the Guild was designed to provide clothing to orphans. By the way, we know Lady Wolverton—sort of. Regular readers of this blog have seen a bunch of her jewelry.


In 1897, when Princess Mary Adelaide passed away, Mary of Teck (by then, married and known as The Duchess of York), took over the patronage of the guild and by 1914, it had been renamed “Queen Mary’s Needlework Guild” since, by that point, Mary and her husband had ascended the throne. 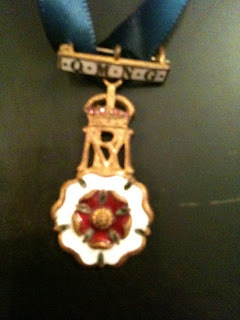 Queen Mary’s Needlework Guild was dedicated to supplying clean linens to the boys fighting in World War I. Queen Mary involved herself with the Guild for the rest of her life. In fact, in 1953, she called a meeting of the Guild’s leaders at her home at Marlborough House. She was feeling rather poor and didn’t attend the meeting. She died the next day.

Now, Queen Mary, until her death, was very proud of her clothing guild. And, she was especially proud of the Society ladies who dedicated their time and effort to the cause. As a reward for their efforts, Queen Mary would award a special medal to those ladies who worked with her. The medals of gilt brass and enamel were designed as a Tudor Rose suspended from a bar-pin adorned with the initials “QMNG.”

Here’s one. I recently acquired this for my collection of Royal Memorabilia. I’m not sure to whom it belonged, but it dates to the First World War and it’s in remarkably good condition. I’m particularly thrilled with it because I like to think that Queen Mary herself touched this when she awarded it to its recipient. I don’t know if she really did or not. But, I’m going to continue to think so. 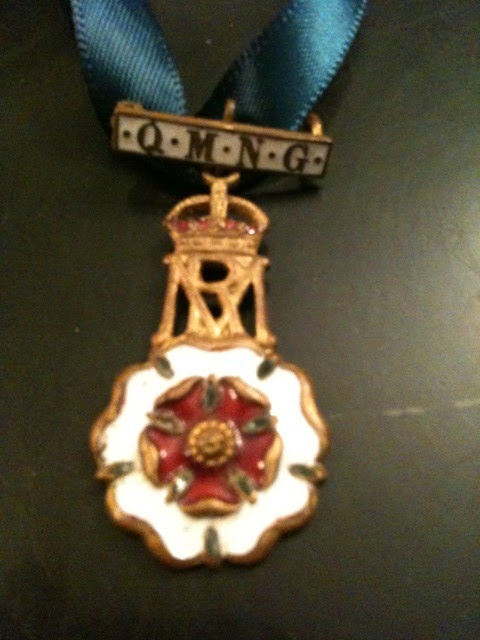 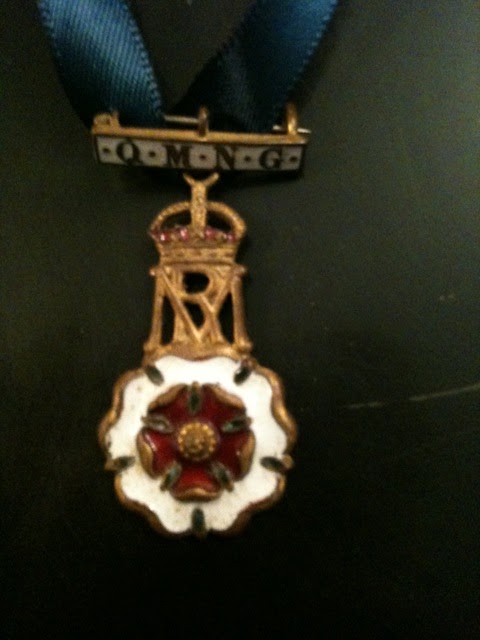 Posted by Joseph Crisalli at 10:41 AM

I can't believe you actually have one! It looks near mint, too. Great colors.

~D...
feeling particularly chatty this evening in anticipation of the coming cold front, I think. ;)