This delicate tea tray of tin-glazed earthenware depicts a scene of a tea-party in an interior, the whole of which is surrounded by an attractive foliate and scroll border. A Greek key pattern accents the lip around the edge. The reverse is marked with the inscription: 17- : E + A : -43. Two of the tray's original seven bun feet are missing. 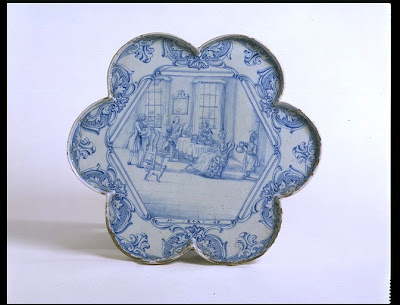 Such tea trays were important items in the home as they were employed to carry the teapot and other utensils to the table. Since, in the early Eighteenth Century, tea was an extravagance few could afford, it was prepared by the staff of a wealthy household directly in front of guests and family (as opposed to in the kitchen) as a display of prestige. As the price of tea began to fall, the theatricality of tea-making became less fashionable.

Very few delftware tea trays like this one survive. This example is especially interesting in that the shape is based on silver trays made between about 1710 and 1730. Humorously, a tray of the same shape is shown in the tea-party scene which has been painted on the tray itself. A teapot and tea bowls are also depicted on the tray.

Items of tin-glazed earthenware were fired twice--the initial firing was done before any decoration or glaze was applied. The result of this "biscuit" firing was a hard and slightly porous object which was then dipped in glaze and set on boards to dry. They were then painted and decorated before being fired for a second time.

Posted by Joseph Crisalli at 8:50 AM

Email ThisBlogThis!Share to TwitterShare to FacebookShare to Pinterest
Labels: antique, Ceramics, Object of the Day, Tea, Victoria and Albert Museum