Mastery of Design: An Enamel and Diamond Toothpick Case, 1780

Did you think that just because I’ve been slow with the posts today (I still don’t feel well) that I’d neglect to give you a shiny thing to look at? Today’s sparkler is an oval, jeweled, and enameled gold toothpick case. The cover and base are painted in translucent blue over an engine-turned ground which has been edged in opaque white with gold flowers and translucent blue within gold borders.
The cover of the box—meant to be a toothpick case--is set with diamonds with the initial “O” surmounted by a baron’s coronet and bordered by laurel in an oval frame. The case’s base is set with plaited hair which has been preserved since 1780 under glass within an oval medallion. 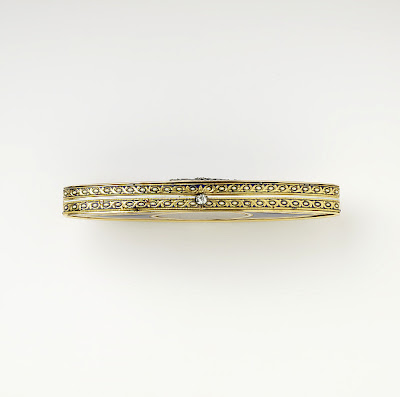 The beautifully enameled sides of the box are punctuated by a diamond thumb-piece while the interior of the lid is set with a mirror. The interior bottom of the base is engraved with a coat-of-arms and a motto, ‘MIHI CURA FUTURI.’

This toothpick case belonged to Robert Henley Ongley, first Baron Ongley (c.1720-1785) who sat as the Whig member of Parliament for Bedford. The inscription was added after his death and in commemoration of his passing. 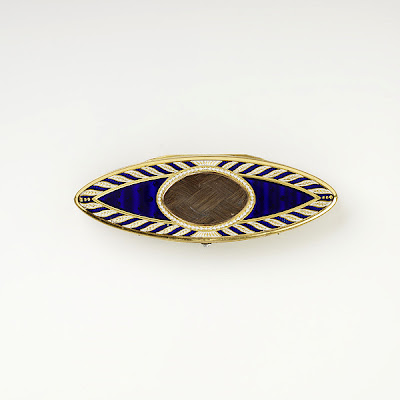 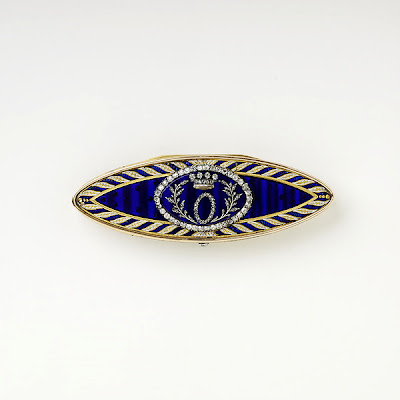 Posted by Joseph Crisalli at 4:02 PM

Wow and this case was just to hold toothpicks. It's so beautiful. Think even today a box of toothpick costs less than a dollar. I wonder if all the Barons in Parliament got together and compared notes on who had the best toothpick case.. I love it!

I'm sure that they did, Darcy. I can just see them all sitting around, pinching snuff and talking about where to get the best little boxes for things you could keep in a fabric bag. Thanks for posting!