Card of the Day: The Imperial State Crown 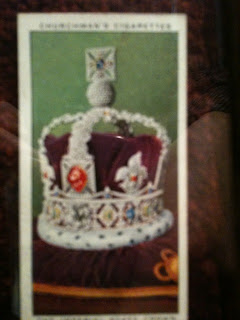 The next card in the Silver Jubilee series from 1935 by Churchman Cigarette Company shows the Imperial State Crown. Not as old as St. Edward’s Crown and considerably lighter and more sparkly, The Imperial State Crown is similar in design to St Edward's Crown: in that it consists of a base of four crosses pattée alternating with four fleurs-de-lis before four half-arches surmounted by a cross. This crown also features a velvet cap inside, surrounded with an ermine border. The Imperial State Crown is more heavily jeweled. It includes 2,868 diamonds, 273 pearls, 17 sapphires, 11 emeralds, and 5 rubies and the famed spinel known as the Black Prince’s Ruby. The cross at the top is set with the blue stone known as St. Edward's Sapphire. This was a sapphire taken from the ring (or possibly the coronet) of Edward the Confessor. The aforementioned Black Prince's Ruby (spinel) is set on the front cross pattée. Also included on the crown are the famous Cullinan II, or Lesser Star of Africa, which is also set in the front; and, on the back band, the 104-carat Stuart Sapphire.

While St. Edward’s Crown is the one used during the coronation, The Imperial State Crown is typically the crown worn at the end of a coronation when the new Sovereign departs from Westminster Abbey.

This is the second crown known by this name. The first—which was very similar—was used instead of St. Edward’s Crown during the coronation itself of both Queen Victoria and her son, King Edward VII, who both complained that the weight of St Edward's Crown was too uncomfortable. The Imperial State Crown is also worn at the State Opening of Parliament.


The present Imperial State Crown was created for the coronation of King George VI in 1937 by the Crown Jewelers Garrard & Co. It is an exact replica of the original Imperial State Crown which had been made for Queen Victoria, but is even more lightweight than its predecessor. The Crown was again remodeled for Queen Elizabeth II's coronation in 1953 to give it a more feminine appearance than it had when made for her father. This was accomplished by lowering its total height by one inch.

Posted by Joseph Crisalli at 11:27 AM