Building of the Week: The Palace of Westminster 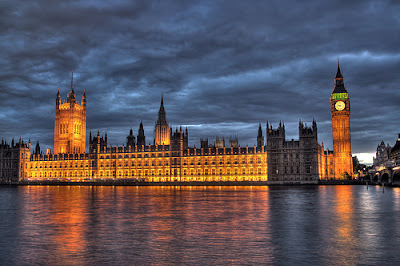 One of the most recognizable and iconic buildings in England, with its famous clock tower and impressive Gothic revival ornamentation, The Palace of Westminster (similarly referred to as the Houses of Parliament or Westminster Palace) is the central home of the two houses of the Parliament of the United Kingdom—the House of Lords and the House of Commons.

The Palace of Westminster proudly stands on the north bank of the River Thames in the high-end City of Westminster at the center of London and is near the famed Westminster Abbey and the important government offices of Whitehall and the Prime Minister’s residence on Downing Street. 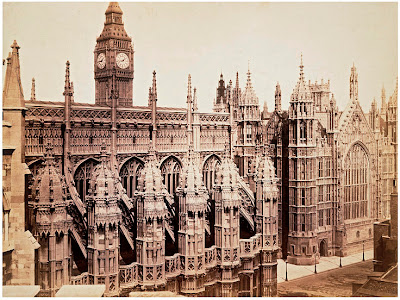 So, why is this structure which is the equivalent to the U.S. Capitol referred to as a palace? The name comes from a reference to “The Old Palace” (a series of medieval buildings which were lost to fire in 1834). The structure retains its original style as a palace since it is technically considered a Royal residence—if only for ceremonial purposes.

The original royal palace on the site was built in the Eleventh Century. At the time, Westminster Palace was the primary London residence of the Monarchy. That first complex was destroyed—for the most part—in a fire in 1512. Since Parliament had been meeting at Westminster Palace since the Thirteenth Century, after the fire of 1512, the portion of the palace that was saved remained the seat of Parliament while the monarch’s residence was moved elsewhere. That building was also the seat of the Royal Courts of Justice, based in and around Westminster Hall—the only original part of the structure (built in 1096) which still remains and is a significant part of the Coronation procession.

The aforementioned fire of 1834 (which was recorded in a painting by J.M.W. Turner) destroyed most of what remained and the structures that had been added since 1512. All that remained after the 1834 fire was Westminster Hall, the Cloisters of St Stephen's, the Chapel of St Mary Undercroft and the Jewel Tower.

Since the Palace of Westminster was such an important part of the inner-workings of the British government, there was no question that the complex needed to be rebuilt. As was often the case with major building commissions, a competition was held to decide upon the best architect and team for the job. 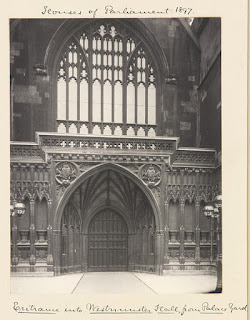 The commission of the reconstruction of the Palace was won by architect Charles Barry who planned an enormous new complex in the Perpendicular Gothic style. What remained of the Old Palace (with the exception of the detached Jewel Tower) was absorbed into the new building which contains over 1,100 rooms which flow around two series of graceful courtyards. The new palace’s principal façade faces the Thames.

Barry was joined on this project by Augustus W. N. Pugin, who was the leading authority on Gothic architecture at the time. Pugin was instrumental in much of the adornment and decoration of the palace—offering designs for everything from floor tiles and windows to the furnishings. Construction began in 1840 and lasted for over thirty years. Progress was slowed by cost overruns, political woes and the deaths of both Barry and Pugin. The loss of Pugin greatly retarded the interior decoration which consequently continued well into the Twentieth Century. A bombing in 1941 during the Second World War greatly damaged the Palace and required considerable repair. 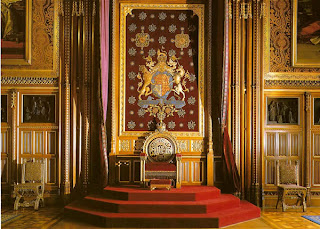 One of the most famous aspects of the palace is its iconic Clock Tower. The tower has become known erroneously as "Big Ben" after the clock’s main bell. The clock tower and the palace are instantly recognizable and have become synonymous with the government of the U.K.

Posted by Joseph Crisalli at 2:31 PM

Email ThisBlogThis!Share to TwitterShare to FacebookShare to Pinterest
Labels: Building of the Week, Palace of Westminster