Mastery of Design: The Reflection Brooch, 1940

This handsome brooch of white gold, sapphires, moonstones and diamonds is part of the famed “Reflection” line of jewelry by Trabert & Hoeffer-Mauboussin. The company was formed in 1929, and quickly became a fashionable stop on New York’s Park Avenue. Known for its distinctive line of “Reflection” jewelry, Trabert & Hoeffer-Mauboussin supplied gems to some of New York’s most elite clients. The “Reflection” line was the first to introduce the unusually bold shapes and colors which had defined 1930’s European jewelry to the wealthy American comsumer.

The jewels in the “Reflection” line were made by casting. This technique allowed the firm to experiemnt with a range of standardized parts and thereby create continuity within the collection. The company advertised the line with the slogan, “Reflection – Your Personality in a Jewel,” which they hoped would encourage women to create their own desired pieces by selecting from several different arrays of standardized parts. This sort of customization was new to most consumers who enjoyed the chance to purchase personalized jewelry of their “own” design. 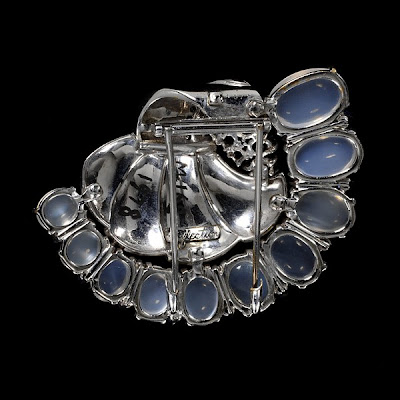 Posted by Joseph Crisalli at 2:45 PM