Card of the Day: The Launch of the Queen Mary

On May 26th, 1936, the RMS Queen Mary sailed her maiden voyage in honor of her namesake’s birthday. The ship was launched in September of 1934. Construction on the great vessel had begun in 1931 and the name of the ship was closely guarded. Executives at the Cunard Line had intended to name the ship the RMS Victoria. Of course, they had to first ask the permission of King George V before naming the ship. Upon their request, they asked the King if they could call their ship after “Britain’s greatest Queen” (referring to the King’s grandmother, Victoria), he responded to the vague request, that, of course, his wife would be delighted to have the ship named for her. King George V was forever in love with Queen Mary, and, in his eyes, she was, in fact, “Britain’s greatest Queen.” 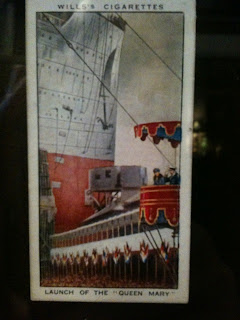 The representatives for the Cunard line couldn’t really back out of the situation by saying. “No, Your Majesty, we meant your grandmother,” and, so, they quickly and quietly changed their plans and named the ship after the reigning Queen Consort.

Upon the 1934 launch of the ship, Queen Mary happily christened the massive vessel, laughing with girlish delight when the champagne bottle didn’t break, and instead, bounced right back to her.

This event is chronicled in one of the series of Silver Jubilee cards produced by Wills’s Cigarette Company in honor of King George V and Queen Mary. 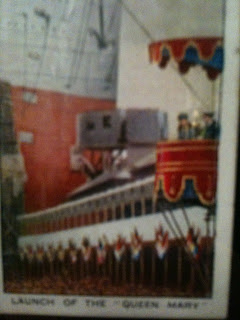 The reverse of the card reads:

LAUNCH OF THE QUEEN MARY


"I am happy to name this ship; 'Queen Mary'." Having bestowed her own name on the great vessel, formerly known as "534," Her Majesty the Queen launched the world's largest liner on the Clyde on September 26th, 1934. A quarter of a million people in Messrs. John Brown & Co.'s shipyard watched the huge shape gather momentum, cleanly take the water, and send a white wave foaming over the opposite shore. The King (who is seen with the Queen acknowledging the cheers as Their Majesties approached the launching platform) described the liner-the first built for the combined Cunard-White Star Fleet-as "the stateliest ship now in being."

And, look, it’s been filmed!

Posted by Joseph Crisalli at 10:45 AM

QM fans might like to read an extract from my Dad's war memoirs at the link below. He sailed in her for 3 weeks in 1942, arriving in Egypt early '43, to face some fierce fighting with Monty's 8th Army in North Africa.
See http://www.grimdetermination.co.uk/#/queen-mary-voyage-ww2-diary/4553587566
Enjoy!
Paul