Card of the Day: The England to Australia Air Race, 1934 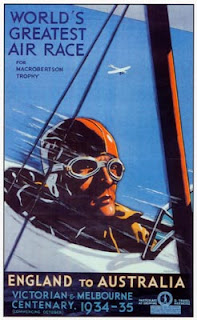 
The dramatic launch of the race was attended by King George V, Queen Mary and their son, The Prince of Wales (later King Edward VIII, later the Duke of Windsor). The event is commemorated in a card by Wills’s Cigarette Company produced in honor of the 1935 Silver Jubilee of King George V and Queen Mary. 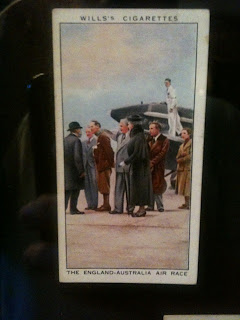 The reverse of the card reads:


On October 20th, 1934, the eve of the Air Race from England to Australia for a 10,000 pound prize, the King, the Queen and the Prince of Wales appeared at Mildenhall, where mechanics laboured to have the machines ready for the start at 6:30 the next morning. Seconds were so precious that special permission was asked for repairs to the D.H. Comet (flown by Cathcart Jones and Waller) to continue while the Royal party were shown round the sheds. The Queen-behind whom stand Mr. and Mrs. Mollison-had never stepped inside an aeroplane until this visit to Mildenhall. Scott and Black, the winners of the race, covered the 11,323 miles in the astonishing time of 71 hours.

This interesting video shows the events: 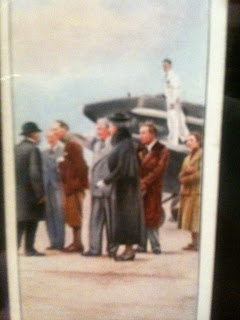 Posted by Joseph Crisalli at 10:27 AM