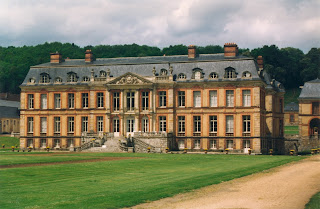 French Baroque architecture reached a critical apex with the designs of architect Jules Hardouin Mansart. Mansart, one of the most notable architects of the Seventeenth Century, became closely associated with the grandeur and opulence which rose in prominence during the reign of Louis XIV. One of the hallmarks of Mansart’s designs was his use of the roofline which we now refer to as “Mansard”—named for the architect’s great-uncle, François Mansart. Also alled a “French Roof,” the Mansard roof is a four-sided hip roof in a gambrel style which is characterized by two slopes on each of its sides. The lower slope slants at a steeper angle than the upper and the whole of it is interrupted by dormer windows which afford additional useable space. 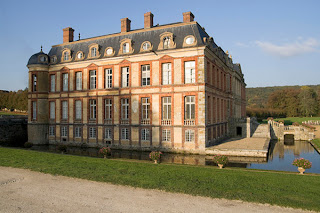 An excellent example of the Mansard roof can be found at the Château de Dampierre in Dampierre-en-Yvelines, in the Vallée de Chevreuse, France. The Château, designed by Mansart, stands proudly behind ornate wrought iron gates. With its Mansard roof, balustrades, archways and heavy ornamentation, it is the height of French Baroque architecture.

The castle was built for the duc de Chevreuse between 1676 and 1683 and features a formal garden designed by André Le Nôtre who included an elegant water feature. The Château itself boasts lavish staterooms and interiors. 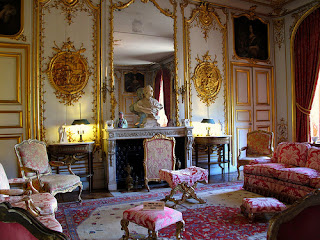 The interiors of the castle have been altered over time. The most notable alteration came with the refurbishing of the grande gallerie so that archaeologist and collector, Honoré Théodore Paul Joseph d'Albert, duc de Luynes, might better showcase his magnificent collection of artifacts. For this purpose, Hellenistic-style friezes and bas reliefs wee added by sculptor Pierre-Charles Simart and a fresco entitled “The Golden Age” is the only remaining evidence of an attempt to adorn the gallery in frescoes by the celebrated painter Jean Auguste Dominique Ingres. 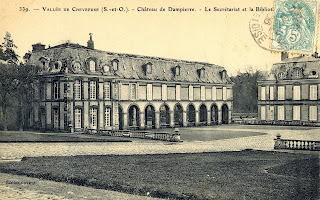 The Château de Dampierre is open to the public for tours. For more information, visit their official Web site, but be forewarned that it’s in French, as one might expect.


Posted by Joseph Crisalli at 4:10 PM

Email ThisBlogThis!Share to TwitterShare to FacebookShare to Pinterest
Labels: Baroque, Building of the Week, France