Pelhams, the wildly popular British toymaker, began in 1947 when Bob Pelham opened his business in Malborough, Wiltshire. The company survived until 1993 and, in that time, made thousands of different puppet characters of both glove and marionette varieties. The Pelham puppets were simple to operate for children and evolved in appearance as fashions changed from decade to decade. It’s easy to identify when a Pelham puppet was made just by looking at it because the designs seem to represent the visual ideals of each era.

For example, this marionette March Hare could not possibly look more like a creation of the 1950s. And, that’s when he was made—between 1950 and 1955. He features a solid, molded wooden head and hands, all painted. Meanwhile his body and arms are made of wooden blocks which are hidden under his costume of striped trousers, a green jacket and waistcoat and an orange bow tie. 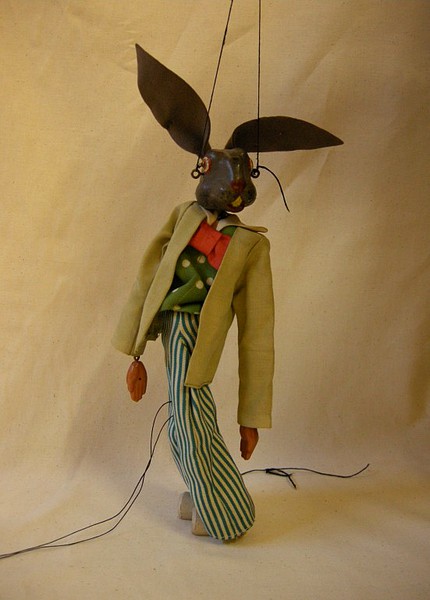 Posted by Joseph Crisalli at 10:24 AM