This figure of Harlequin is rendered in hard-paste porcelain which has been painted in enamels. Made by Johann Joachim Kändler around 1740 for Germany’s Meissen Porcelain Factory,  Harlequin leans against a stump with a monkey held behind his right knee.  He seems to be using the monkey as some sort of instrument.  He’s pulling the screaming monkey's tail with his right hand while playing a pipe which is held in his left hand.  A screaming monkey was apparently the unofficial musical sponsor of the Eighteenth Century.  I kid, of course, but I’ve seen a good many works of art which involve monkeys in musical agony.
This is one of a set of Commedia dell’Arte figures by Kändler.  Many of the figures depicts Harlequin in various, brightly colored outfits.  Here, he is wearing a grey hat with a turquoise rosette, a white ruff, a lozenge-“diapered” jacket in red, blue and yellow with trousers with plum colored stripes, yellow shoes and blue rosettes. The base of the figure is embellished with flowers and leaves in colors which match Harlequin’s suit. 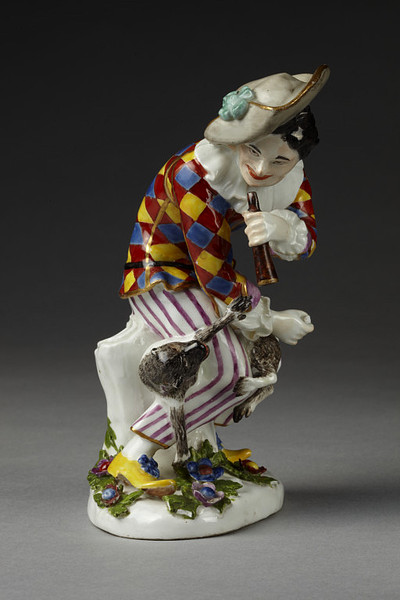 Posted by Joseph Crisalli at 10:11 AM