François Aimé Argand (1750-1803), a Swiss scientist, invented the circular wick in 1782, allowing every part of a lamp's wick to be equally exposed to the air, and letting the wick burn evenly and more brightly than would a conventional wick. This idea was the main component of the Argand lamp which combined a cylindrical wick with a tall, narrow glass chimney to create a draft of hot air--producing up to twelve times mire light than earlier lamps.

Matthew Boulton--known for his production of cut-steel buttons (1728-1809) was introduced to Argand in 1784 by William Packer, a Birmingham merchant. Boulton was intrigued by the ingenuity of Argand's invention and put into production lamps made in Sheffield plate incorporating Argand's design for the wick. The trouble was, Argand's patent rights had not been secured. Naturally, their friendship ended badly.

This particular lamp, one of a pair, by Boulton is engraved with the Arms of Charles William Stewart, 1st Baron Stewart, later 3rd Marquess of Londonderry (died 1854) and is encircled with the collar of the Order of the Bath. The V&a notes, "It is most unusual to be able to date closely any piece of Sheffield plate, but since Stewart became Baron Stewart in 1814 and was created Viscount Seeham in 1823, this lamp must have been made between these dates." 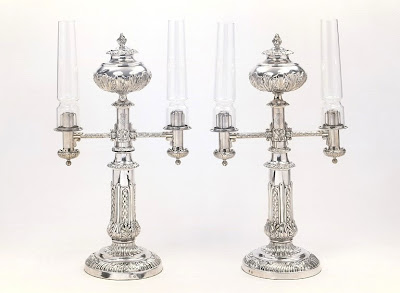 Posted by Joseph Crisalli at 8:55 AM

Email ThisBlogThis!Share to TwitterShare to FacebookShare to Pinterest
Labels: antique, lamps, Object of the Day, Silver, Victoria and Albert Museum