A pendant of enameled gold is set with an onyx cameo of Queen Elizabeth I and with table-cut rubies and diamonds. It is hung with a cluster of pearls. On the reverse, an oak tree has been enameled. This is known as The Barbor Jewel.

As with most family traditions, this one is probably apocryphal. The style of the enameling, setting and the Queen’s costume indicates a later creation date, from about 1615-1625. Regardless, it’s an important historical ornament, and as beautiful as the day it was made. 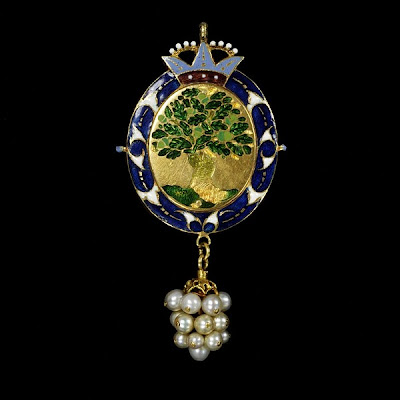 Posted by Joseph Crisalli at 11:13 AM