Card of the Day: The Head of the Royal Sceptre with the Cross 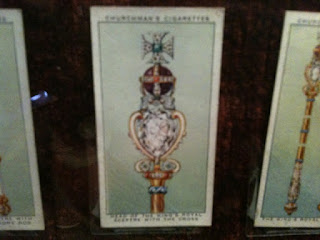 Certainly the most famous scepter in the British Crown Jewels, if not the world, this majestic rod features one of the most celebrated diamonds ever cut. It is known as the Sceptre with the Cross, St Edward's Sceptre, the Sovereign's Sceptre or the Royal Sceptre and was originally made for the coronation of King Charles II in 1661—as most of the Regalia seems to have been.

Posted by Joseph Crisalli at 10:59 AM

Wow, that sure is a big sparkler !