Object of the Day: A Victorian Serpent Stickpin 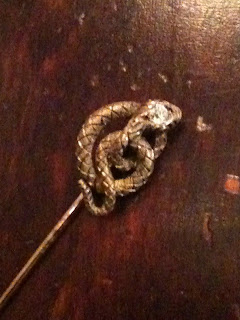 Queen Victoria’s engagement ring was a band in the form of a serpent. The snake had become a symbol of eternity and everlasting love. Of course, anything Victoria did became the height of fashion. And, so, symbolic serpent jewelry was quite popular during the Victorian Era in Britain.


This mid-Nineteenth Century gold stickpin is one such item. The snake is sculpted in extraordinary detail as he winds around himself. In his head, a diamond has been set. The diamond was a symbol of constancy. This was probably a gift from a wife to her husband—a tangible reminder of her unending affection and loyalty.

Artistic representations of serpents found their way into many forms of jewelry from rings to necklaces. Interestingly enough, it’s a theme that has come back into fashion in the last year or so. Those modern pieces are all the more interesting when we consider what inspired them.
Posted by Joseph Crisalli at 9:40 AM