This tazza, or footed plateau, is comprised of moulded earthenware glazed in brilliant blue and painted with enamels with a scene of a female figure holding a daisy. It is inscribed, “A la Belle Marquerite” in the center, and “soi toujours la confidante de nos amours a Marguerite.” Something about always being the confidante of her loves, is Marguerite. Or maybe something about pudding. You decide.

Made in Paris, this sumptuous tazza is the work of Joseph-Théodore Deck (1823-1891). Deck was born in Guebwiller, Alsace, and apprenticed to a traditional stove-making firm in Strasbourg. He would later study in other towns along Germany and Austria, settling in Paris around 1851 when he was appointed as overseer for the Dumas stove and tile firm.

In 1855 Deck launched his own studio and, later, even, his own retail shop, with the aid of his brother, Xavier. The Deck Brothers commissioned a host of well-known painters of the day to provide designs for their wares, and, often to paint them in their own hand. This tazza was painted by Emil Auguste Reiber (1826-1893). Joseph Deck was especially praised for his innovative glazes. He’d spent years researching glazing and color techniques of the handsome ceramics of the Middle and Far East. Just three years before his death, he was appointed as Director of the National Manufactory at Sèvres.

It has something of a "That Girl" vibe, too.  yes? 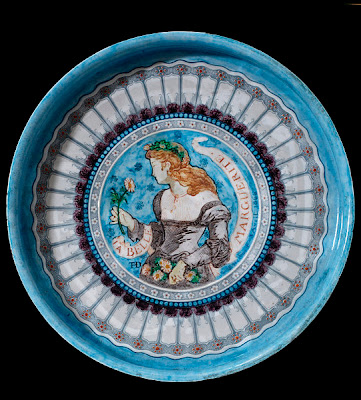 Posted by Joseph Crisalli at 9:47 AM