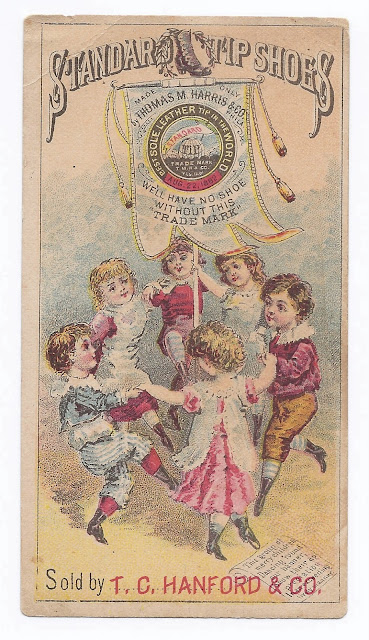 The small-footed, circle-dancing children of Philadelphia required special shoes to fit their tiny toes and miniscule arches. After all, when dancing in a circle, precision is everything. So. One Thomas Harris & Co. of Philadelphia created Standard Tip Shoes especially for these diminutive dancers. Much rejoicing followed as the sextet danced around a banner in honor of Mr. Harris and his associates. I was just in Philadelphia a couple of days ago and if you listen carefully, you can still hear their cheers of “Thomas! Thomas! Thomas!” on the wind.

Okay, I kid. I couldn’t hear them at all. I was in the airport.

No. Really, this is a trade card from the early 1880s advertising for Standard Tip Shoes which were, indeed, made in Philadelphia by Thomas Harris and Co. The chromolithograph of joyful children was made for the Harris Company and was overprinted with retailer information, in this case, for T.C. Hanford & Co. of St. Louis.

In the Victorian tradition of wonky proportion in advertising imagery, the children pictured here do have especially small feet for their bodies. One would think that a card for shoes would emphasize the feet, but I suppose the illustrator made an effort to show how neat and tidy these, clearly well-fitted, shoes were.

The banner held by the children tells us that that in August of 1882, these shoes were made with “The best sole leather in the world.” It also states that the children demand them. “We’ll have no shoe without this trademark,” they declare—quite rightly, I’m sure.

Let’s have a look at the reverse. Ah, it seems the dancing children have donned “Robin Hood” hats. Led by a woman in trousers (Shock!) and a musical man, they have staged a parade in honor of Standard Tip Shoes. Everyone’s happy! They all have two feet! Well, except maybe for the girl in the back. A triumph for 1882, indeed!

But, are you worried that your children’s feet might not develop properly? Will they grow extra faces on their toes or whatnot? Well, Mr. Harris wants you to rest assured that he’s got it covered.

WILL INSURE PERFECTLY DEVELOPED FEET
FOR YOUR CHILDREN.
LOOK FOR THE TRADE MARK BEFORE YOU BUY.

Come all of you with “STANDARD TIPS”
And fall into the line,
And as we march we sing the song
The “STANDARD” every time. 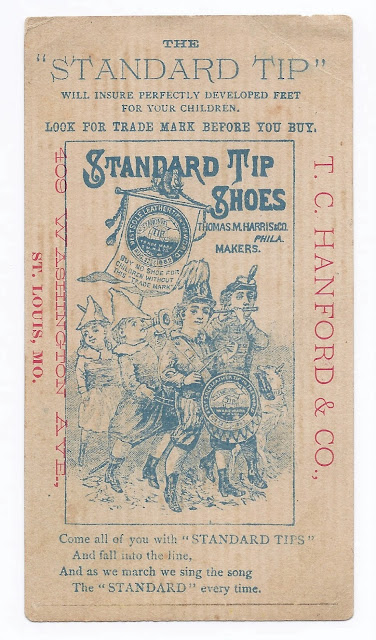 Posted by Joseph Crisalli at 10:03 AM