Antique Image of the Day: The Strange Case of Lulu, El Niño Farini, the Gender-bending Aerialist

With the rise of photography in the Victorian era, came a desire to collect photographs.  Having a photograph of a family member was a rather costly endeavor, but purchasing a souvenir or novelty photo of a celebrity was common practice.  “Cartes de visite” and, later, “cabinet cards” were eagerly collected by people from all walks of life.

The photograph seen above, dating to 1870, comes from a sizeable and important collection of “cartes de visite” and “cabinet cards” which were removed from their backings and mounted in albums by Guy Tristram Little (d.1953) who bequeathed them to the V&A. The photograph depicts “Lulu” (known as “El Niño Farini”) on a trapeze.
So, who was Lulu?  We can tell that he was an aerial artist, but there’s a lot more to the life of this handsome, golden-haired lad.  He was born in 1855, an orphan, and first performed at the age of ten at the Alhambra Theatre in London alongside his adopted father, Guillermo Antonio Farini--an acrobat and tightrope walker of good repute.
The elder Farini was not really Spanish or Italian--as his name suggests.  Farini was actually called William Leonard Hunt.  His stage name was meant to suggest exotic romance.  No one is quite sure where exactly Farini found the boy.  We do know, after careful research, that the child was born Samuel Wasgate somewhere in Maine, USA.
It has been suggested that William Hunt adopted the boy because he demonstrated no fear of heights and was stunningly handsome.  Little Sam appeared with Farini at Chelsea Pleasure Gardens for the first time in 1866, performing an act that they called “Le Tambour Aerial” (“the aerial drummer”) wherein, the boy, swung through the air balancing on his neck, banging a drum. 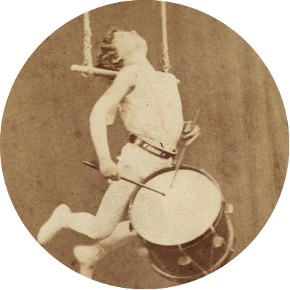 Audiences at that 1866 performance were aghast by how young the boy was (Farini claimed that Sammy was only eight, though he was closer to eleven).  Nevertheless, the fears of the crowd were assuaged when they noticed that Sammy never lost his handsome grin throughout the act.  He appeared to be enjoying himself.  Farini also had employed a safety net to protect his investment, er…son.  This is actually the first recorded use of a safety net in an aerial act.  From then on, the duo performed in music halls across the England billed as ‘The Flying Farinis’.
Three years later, at the Crystal Palace (which had gone through a series of other purposes after the 1851 Exhibition and before its decay and destruction by fire) in 1869. William Hunt carried Sammy on his back on a tightrope--180 feet above the audience.  “Farini” hoped to emulate the famous performance of Blondin who, seven years earlier, had carried his daughter in a similar manner.
Sammy retained his youthful handsomeness.  Lean and small with peachy skin, the boy was considered very beautiful.  This beauty, “Farini” noticed, was more feminine than it was the look of a teenage boy.  And, so, William Hunt devised a scheme. El Niño, suddenly, was billed as “Lulu”—a girl.  But, Hunt couldn’t pass his famous boy off as a girl in London.  So, off they went to Paris.
In Paris in 1870, Sammy first appeared as ‘The Beautiful Lulu the girl Aerialist and Circassian Catapultist.” After some time, they returned to London where Hunt encouraged his adopted son to continue to perform as Lulu.
At the Holborn Amphitheatre in 1871, “Lulu” was given top billing.  Sammy was such a smash that he/she was soon billed as “The Eighth Wonder of the World.” “Her”famous act consisted of “being catapulted from the ground up to a trapeze and turning three full somersaults.”  Lulu/Sammy also wowed audiences by appearing to fly.
In reality, “Lulu” “flew” by being fired into the air by a contraption hidden under the stage.  It was this contraption which was soon to be the end of “Lulu”
At a performance in Dublin, in 1878, the contraption malfunctioned.  “Lulu’s” legs were terribly injured by the force of the explosion which propelled her.  In fierce pain, Lulu flew through the air, but, instead of her usual graceful landing on a plank suspended between two trapezes, she fell—bouncing off the edge of the safety net.  This blow caused further severe injury.
“Lulu” was rushed to hospital.  Once admitted, however, Farini saw his act go up in flames.  Lulu was immediately discovered to be a male.
Sam eventually recovered.  He continued performing for Farini, but as a male.  The duo suffered terrible embarrassment when Lulu’s gender was discovered.  Furthermore, there was, as was reported, “much embarrassment amongst male admirers” when it was revealed in 1878 that Lulu was in fact a man.
Posted by Joseph Crisalli at 5:10 AM