We’ve seen a lot of Coronation Cups here at Stalking the Belle Époque from the commemorative cups in my own collection of Royal memorabilia to the similar items which are housed in the Royal Collection and the V&A, but we’ve never seen one like this.

This magnificent silver-gilt cup and cover were made from silver that was reclaimed from the precious metal which originally decorated the canopies used during King James II's coronation in 1685. After the ceremony, the silver was divided amongst the barons who carried the canopies which covered James II during the coronation. 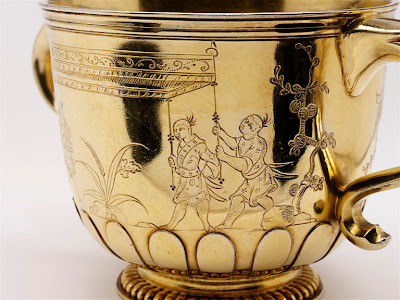 Two of the barons (from the same family)--Cresheld Draper, MP for Winchelsea and Gawden Draper--combined their share of the coronati0n silver to make this commemorative cup which has been chased and engraved with stylized scenes from the coronation depicting, especially, the barons carrying one of the canopies. This was a clever way to commemorate the participation of the Draper family in the event.

The four figures carrying the canopy are rendered in the fashionable chinoiserie style. These figures are flat-chased on one side and commemorate the original use of the silver. The family’s coat of arms and an inscription in Latin explain the scene. 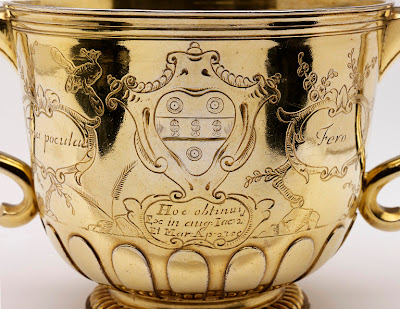 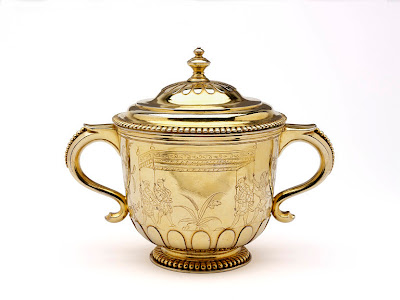 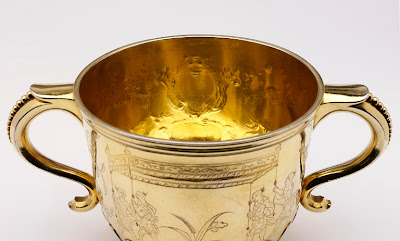 Posted by Joseph Crisalli at 6:06 AM