Film of the Week: The Umbrellas of Cherbourg, 1964 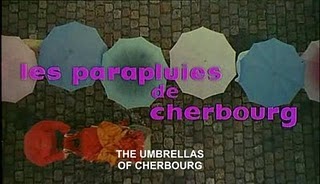 Let me begin by saying that I adore this film. In my opinion it is one of the most breathtaking color films ever made. Visually, it is a symphony of color. Adding the haunting music of Michel Legrand only makes the experience more powerful.

Les Parapluies de Cherbourg was directed by the talented Jacques Demy. Technically an operetta, all of the dialogue is sung—set to music by the brilliant Legrand. Famous songs such as “I Will Wait Forever,” and “Watch What Happens”—staples of the Legrand portfolio—received their start in this gorgeous production. 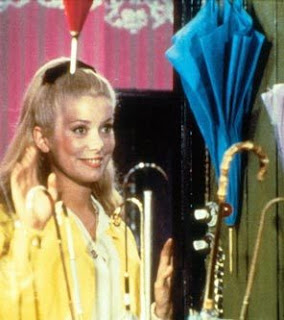 The film is actually the second in what Jacques Demy considered to be a romantic trilogy. The first was 1961’s Lola and the third was 1967’s Les Desmoiselles de Rochefort. While each film stands up as an individual piece, viewing all three enriches the experience as all of the threads form a dazzling tapestry.

Les Parapluies de Cherbourg stars Catherine Deneuve as a young woman, Genevieve, who is in love. She finds herself sneaking out of her modest home above her mother’s umbrella shop to meet her beloved, Guy, played by Nino Castelnuovo. When Guy finds himself deployed to the Algerian War, Genevieve realizes that she is pregnant. Her mother, though supportive, is also in a terrible situation financially and seeks to make a better life for her daughter. What follows is both heartbreaking and uplifting. 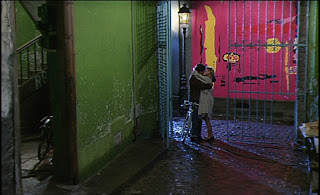 I think I’ll let the film speak for itself. Here is a brief clip of the film’s opening credits and the song, “I Will Wait Forever.” The moving performances, exceptional music and amazing color imagery make Les Parapluies de Cherbourg and unforgettable film.  Its recent restoration has returned the film's original clarity and vibrancy, so, fortunately, many more generations will be able to fall in love with it.


Posted by Joseph Crisalli at 4:15 PM

Email ThisBlogThis!Share to TwitterShare to FacebookShare to Pinterest
Labels: Film of the Week, Umbrellas of Cherbourg